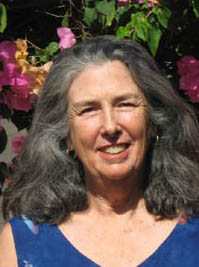 I was born into a “perfect” middle-class WASP family—father a lawyer, mother a homemaker and later a banker’s secretary. Love was expressed through order, obligation, mental strength, self-responsibility, and restraint. Naturally then my longing was for spontaneity, freedom, emotional warmth, connection, and engagement.

After completing my schooling with an M.A. degree in 1962, I was pulled into the tidal wave of change that was sweeping the country. The tight white cotton batting in which my suburban childhood had been securely wrapped was ripped open and a new world opened up, mostly through passionate involvement in the civil rights movement (including spending the summer of 1964 in Mississippi).

My first opening to the greater reality came at the March on Washington in 1963. Looking out over the sea of black and white faces that day, the knowing came: there is only one consciousness here, dressed in different outer forms. Inspired by Dr. Martin Luther King, I sensed the courage that comes when we are impelled by a love for truth.

From political action I moved on to personal therapy and jumped with both feet into the encounter group and human potential movement. This felt like coming home to the place where permission was granted to see and say what I’d always known: that people are full of wild and woolly feelings—rages and fears and mountains of pain–which just need attention and acceptance in order to be released. The inner world of feelings had always been more palpable to me than the outward masks we wear. Penetrating my own masks and defenses, I discovered that meeting my pain directly—without denial, blame or rationalization–allowed it to let go, to melt back into compassion and love. For many years therapy was my path and my passion. A deep well of emotional deprivation was at last being filled.

On a trip to California in 1969 I sensed the powerful influx of spiritual energy that was entering the collective consciousness. By the time I arrived at Esalen Institute in Big Sur, I knew a deep, mysterious part of me was in charge of my life. I had a vision of being tied to one end of a rope, the other end of which was wrapped around a giant winch pulling me, inexorably, home to something vast which I could not name.

At Esalen I met Donovan and the sparks flew. Here was a mate for the life journey. I sensed that together we could challenge limitations, expand heart and mind, and go deep into the unknown. In our Zen Buddhist marriage in 1970 we committed to be each other’s principal spiritual teacher and to accept each other fully. After nearly forty years of traveling the spiritual path together that commitment has been met.

The outer forms of our path have changed, overlapped, and interwoven many times: Zen Buddhism, the mystical Christianity of Meister Eckhart, the Pathwork, shamanic practices including Native American ceremony, the Santo Daime church which came out of the Brazilian rainforest, and the “no-path” of Adyashanti, a contemporary American teacher of spiritual awakening. Yet underneath the changing forms, we have discovered an unchanging drive to realize and live the deepest truth we could find. 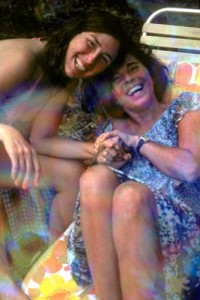 Back to the 1970s: Ready to be pioneers, we started leading weekend workshops and in 1972 bought Sevenoaks, a beautiful 130 acre woodland in the foothills of the Blue Ridge mountains. Sevenoaks is still our home. (www.sevenoaksretreat.org).

In 1972 I met Eva Pierrakos, source of the Pathwork lectures, and fell in love with her and her teachings. I believed in the mission of the Pathwork—bringing all of what we are into consciousness, accepting all the dualities inherent in the human condition, meeting and transforming our shadow side as well as discovering our spiritual essence. In 1976 we donated the Sevenoaks land to the Pathwork and a center was built. Sevenoaks and the Pathwork have gone through many incarnations since then. We devoted many years to trying to create the spiritual community we thought we wanted. Finally we were led to see through the many ideas and illusions we had about community and about spirituality.

I spent ten years writing a book–The Undefended Self: Living the Pathwork–about how to develop the tools for self-exploration. The book maps out the stages of personal work and includes many true stories of personal transformation. The book has been translated into all the major European languages (and recently into Chinese and Japanese).  The Undefended Self has sold especially well in Latin America. We pioneered bringing the Pathwork to Brazil, starting and leading the first training programs there in the 1990s.  The Undefended Self may be purchased through the Pathwork Foundation store:  http://store.pathwork.org/sunshop/index.php?l=product_detail&p=20

In Brazil we met the Santo Daime church and its extraordinary sacrament ayahuasca, a psycho-active tea made from two jungle plants, which has been used by South American shamans for millenia. I found through this sacrament the direct experience of divine love which had been calling me since childhood. The Daime sacrament brought me into intimate connection with the archetype of the Divine Mother, where my soul came to rest.

When I was grounded in my connection with the Mother archetype, life presented its greatest challenge. For ten years my adopted daughter Pamela battled addiction to cocaine, heroin and meth-amphetamine. For both of us, this was a journey to the depths of hell. Being dragged through a pain which stumped my mind and broke my heart brought me to a much deeper surrender.

My journey with my daughter taught an essential truth about the spiritual path: it’s not at all what the ego/mind thinks it is nor is it what the ego might want. The ego wants certainty, predictability, control, the fulfillment of its desires, and approval. In my journey everything I thought I knew about spirituality was wiped out, my self-images as a mother and a spiritual teacher were demolished, my illusion of control was smashed, my desire for approval was shredded, my anxiety threatened to overwhelm me, and my heart was broken open. Over and over. Nothing happened the way I thought it should happen. 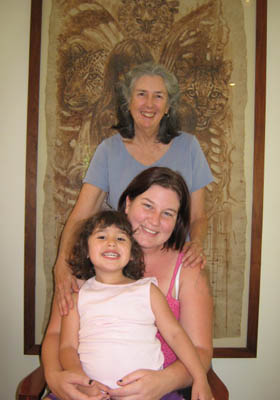 Susan with her daughter Pamela and granddaughter 2010

The defeat of the ego’s agenda opened up a new kind of inner emptiness–a space of not-knowing–which then allowed an awakening into something deeper than anything I had ever known. I stepped out of my personal story of being a human being on my spiritual path and instead encountered directly the deeper reality of the impersonal presence—the compassionate awareness—living beneath all form. Discovering this, our true nature, is a gift more profound and fulfilling than anything the ego/mind could possibly want or know.

Awakening to the reality of the one spirit living, right here and right now, outside of the mind and independent of our human bodily form and beneath all our human dramas—however apparently painful or misguided—is allowing a perception of human life as love in action. The only “story” going on here is love recognizing itself in human form, or, as Adyashanti has said, “the divine becoming human and the human becoming divine.”

Pamela and I have now completed our book about the journey we lived together, Love Unbroken: From Addiction to Redemption.

Life is living itself through me now with greater ease and many moments of inexplicable joy. I especially delight in the dance of life reflected in the natural beauty of Sevenoaks and in my grandchildren’s eyes. I am deeply grateful for the grace of my marriage: daily we remind each other of the oneness living behind all appearances of two-ness.

I’m accepting an even more radical level of not knowing, of letting go of personal agenda, and of resting in simple presence. I’m trusting the awakening which continues to unfold and deepen. When my energy gets snagged by believing my thoughts, the resulting anxiety leads me to question my thinking and to remember that everything, no matter what it looks like, is just love/life/spirit coming back for more of itself (for the aspects that appear to have temporarily forgotten what they are). I am trusting that, eventually, everything relaxes back into its inherent wholeness–into love unbroken, into vastness, into emptiness, into Source.